Sevilla - The city of bad food

As the only guests of the hotel in Ronda, we thought we had an inside track on the nicest room available.  Instead, we were allotted a room with two twin beds, a heater that could only be operated by a physicist, and a shower without proper hot water.  Still, at least we had a roof over our heads.

The phone shattered us awake at 6:30 am, and we quickly showered and departed for the 7:00 bus.  Needing a shave, the hotel attendant scratched his beard as he processed my American Express and waved us good-bye.  At that point, we didn’t know how mad we should have been at him.
Stumbling through the bus station, we realized the ticket window was closed.  We toured around the building in search of the bus to Sevilla, speculating that perhaps it had yet to arrive from its previous town.  In typical Dan & Caitlin fashion, we finally found one bus with an accompanying driver and asked if he was going to Sevilla.  No, he confusedly explained, he was beginning his bus route to pick up the local kids for school.  Thwarted.
Conversing with another Sevilla bound passenger, we ascertained the bus wasn’t leaving until 8:00.  Our helpful hotel attendant, in fact, was not so helpful after all.
Still, the hour delay gave us the chance to warm up in a bright, smoke filled café with café con leches and warm breakfast sandwiches.  It also gave us the chance to map out our day with the help of the LP Brick.
At 8:00 we returned to the bus stop, ready to depart, but thwarted yet again.  Finally, at 8:30 the bus to Sevilla arrived, and Caitlin and I boarded, promptly falling asleep.  Slowly the sleep lifted from our heavy eyelids as the suburbs turned into the ancient city streets of one of the most important cities in Spain.  Sevilla was the dominant city during Columbus’ time – controlling all trade with the colonies until the river’s pollution forced the governors to move to the coastal city of Cadiz.  The legacy is stunning – one of the world’s largest cathedrals and colorfully decorated parks and streets. 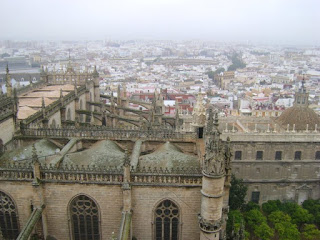 First, we toured the ancient Cathedral, which at 6 euro a piece was no idle whim.  In a classic fusion of Moorish and Christian architecture, the Cathedral retained its minaret which rose 98 meters above the city.  The architects had designed the square, sloped walkway to accommodate imams on horseback, and after the 15 minute climb, I was more than ready to descend on the top of a saddle.
The city of Sevilla rose to our eyes through the mist and fog that encapsulated the city.  Staring out at the medieval streets, we could just make out the bull ring in between gusts of fog and drops of rain.  Setting out to explore the city in a traditional way, we scouted the best path to the bull ring and descended the fortified tower.
Although bull fights only take place in the summer, the bull ring’s staff was still providing tours of the complex.  Home to the year-end festival, this bull ring is the most important in all of Spain.  Touring a bull ring was the one thing I had wanted to do from the beginning of the trip, and finally I was getting the chance to do just that.  Waiting for the tour to begin, I felt the Little Boy Feeling beginning to percolate inside me.  Even on this cold, misty day, my excitement was contagious, with Caitlin glaring at me and ordering calm.
Bowing to the scattered assortment of tourists, our tour guide, a short, 30ish authoritative woman with dark hair, agreed to deliver her spiel in English.  She opened the door beneath the Princess’s Gate and the ten of us straggled into the ringside seats, taking in the dirt and the surrounding benches.  Our guide not only educated us about the basics of a bull fight (three fighters, six bulls) she also pointed out the unique aspects of Sevilla’s masterpiece.  Every podunk village in Spain boasts a ring, but this one was the most famous in the entire country. 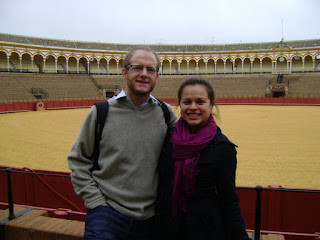 Feeling high after the tour, we set off in search of a meal and an escape from the driving rain.  We settled on a restaurant along a pedestrian street in the center of the city.  We could not have picked more poorly.
Caitlin had read that a common, cheap meal in Spain is the menu del dia or meal of the day – usually prepared for local workers unable to return to their homes for lunch or siesta.  Dreaming of comfort food, instead we were served fish salad, green (think puke) soup and a stew of meat and potatoes that was wholly unacceptable.  For 9 euro, we were getting a deal, but one that even the beggars outside would have refused.  The only thing I could offer up about the meal, “It’s growing on me,” was the strongest complement I could come up with.  The best part, by far, was the Hershey’s Hot Chocolate they brought me for dessert.  Basically, our money was paid to rent on our space while we warmed up our appendages and waited out the rain.
Caitlin, in addition to seeing the ancient cities, was determined to find a new set of boots at some point during our trip.  She decided that Sevilla, in the rain and on very little sleep, was just the place to begin her diligent search.  I couldn’t have been more excited or helpful.  After two hours of fruitless efforts, we were cold, tired, hungry, and ready to rest.  Rather than wait out dinner and a flamenco show, we hightailed it to the train station looking for a smooth ride home.  Seventy Euros was the price for the high speed train – which only traveled a mere 130 miles – a bit out of our price rage. 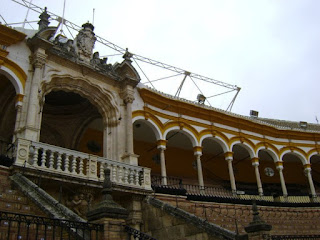 Luckily, we caught a taxi to the bus station, and found a bus traveling to our small town of Fuengirola that only cost 30 euros – much more palatable to the bank account.  Incredibly, the same four people who had rode with us from Ronda that morning, were waiting to board the bus as well.  As Caitlin climbed up the bus steps, one woman reached out and held her hand signifying that they too were heartened by this coincidence.  Two hours later as the bus rumbled into Ronda, we waved good bye to our companions, and waited for the bus to continue on its journey.  Having left Sevilla at 6:00, we were more than ready to get off the bus as it rumbled along the Mediterranean coast after 10 pm.
But rather than drop us off at the bus station, we, as the only passengers left on the bus, hoped the kind conductor would drop us off in front of our resort.  Our entreaties that began 30 miles ahead of our drop-off point fell upon uncomprehending ears.  Still, as we approached Club la Costa, our pleas grew more heeded and our commands of Aqui! Aqui! finally penetrated his uncompromising ears, and he slammed on the bus breaks immediately in front of our favorite destination, our BP station.  With excessive thanks, we leapt off the bus and ran to the store.
Still sore from lunch, and lacking anything for dinner, we scoured the store in search of hot dogs, bread, ketchup, and sustenance to satiate our beleaguered bodies.  We fell asleep exhausted but content with the day’s adventure.
Posted by Dan at 7:12 AM